News Articles on our initiatives that were published in National level papers: 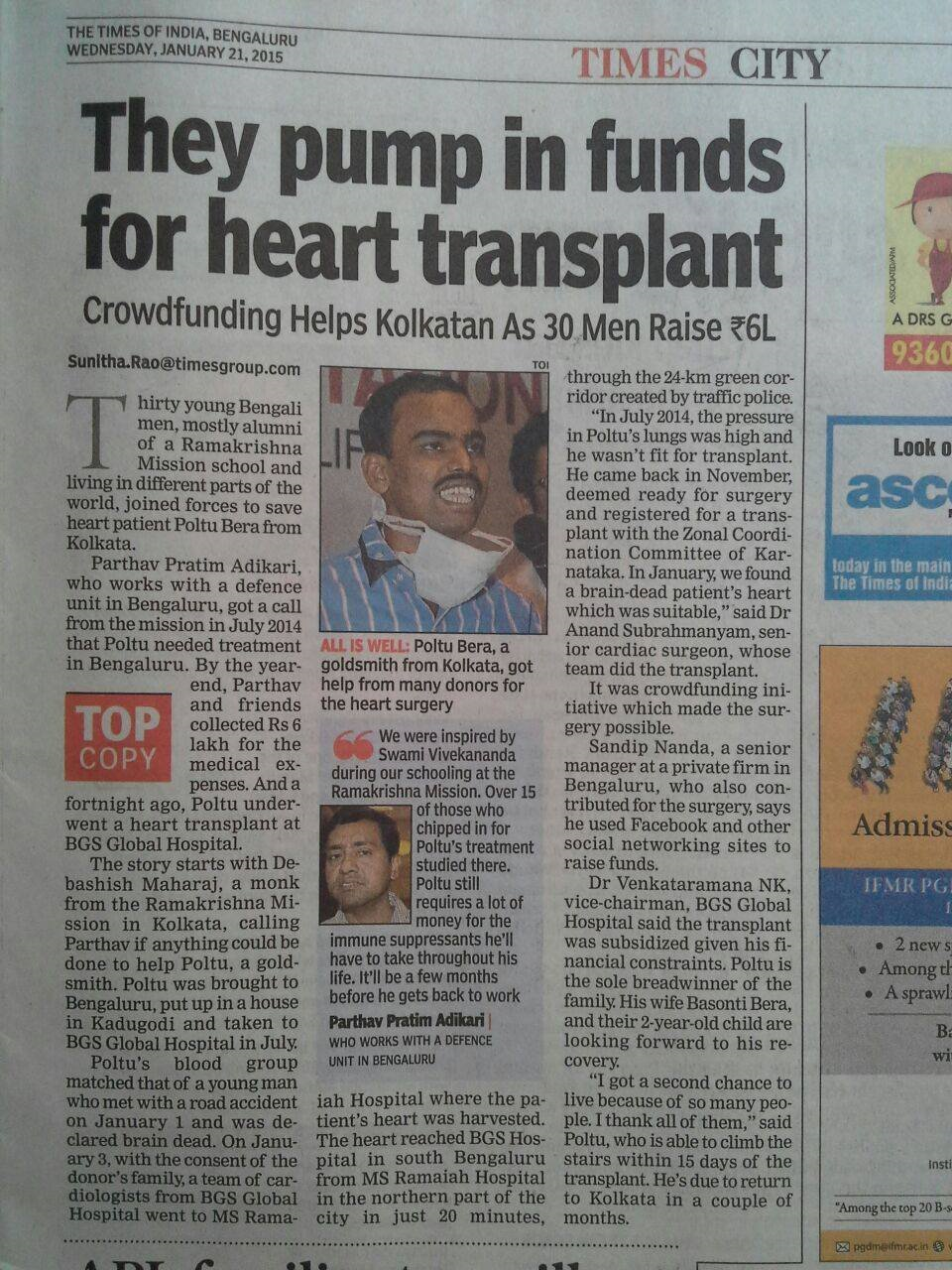 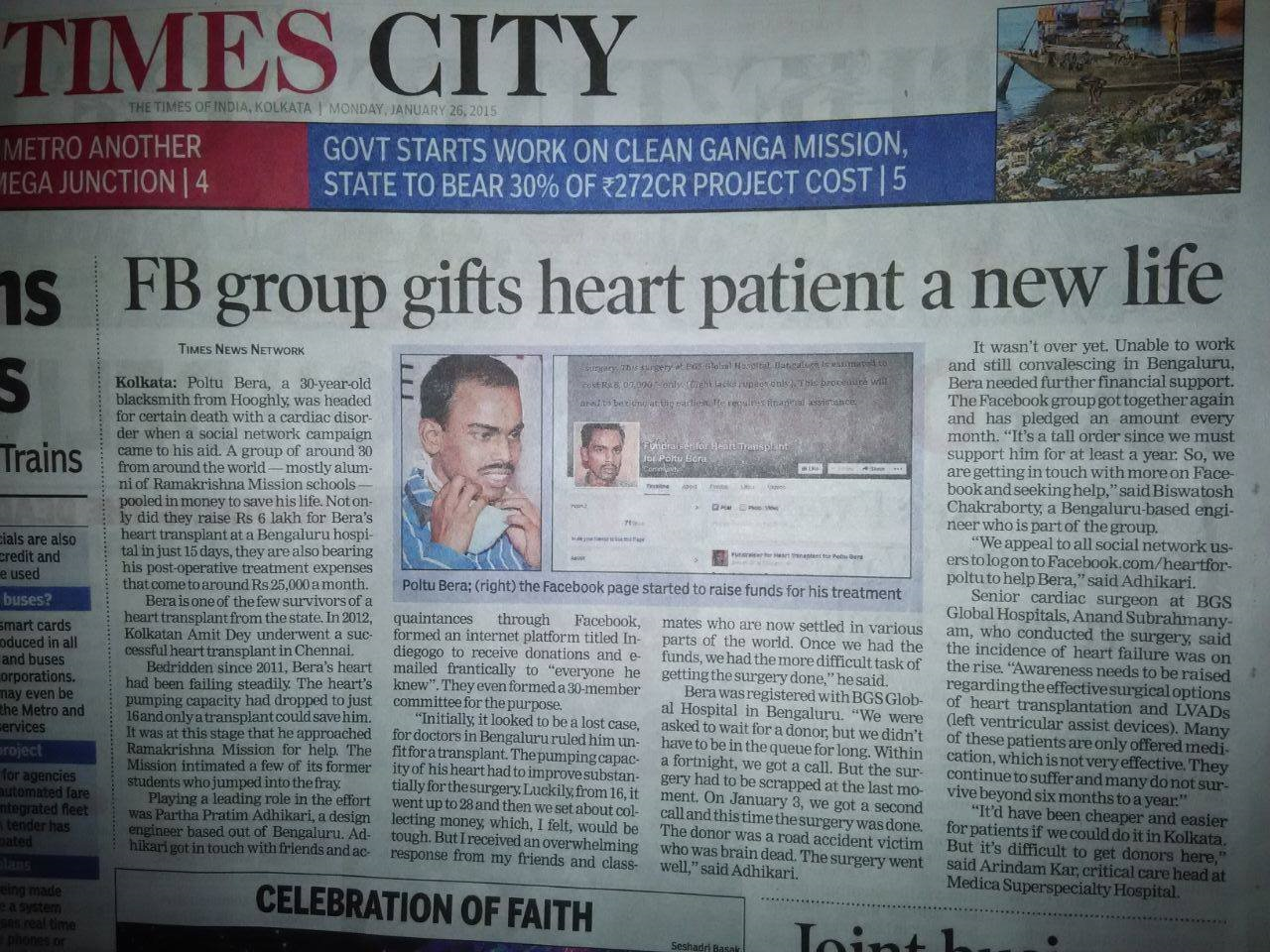 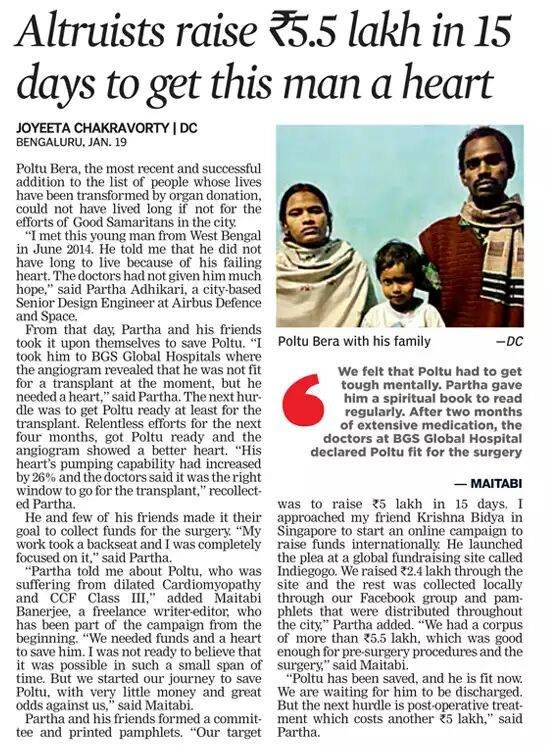 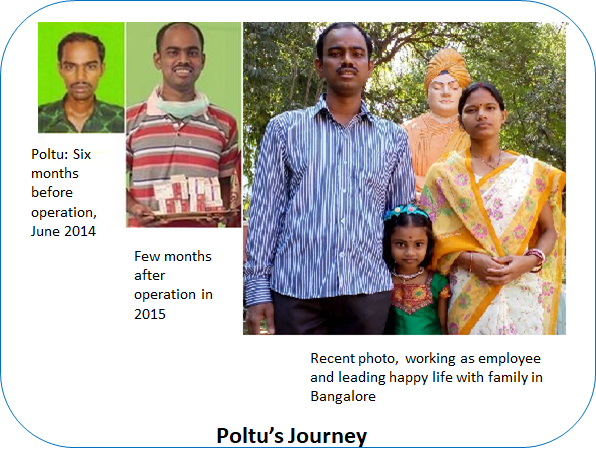 Here's the Video on 3rd Jan 2015 when the Live Heart was transported for our Poltu Bera, from MSR Ramaiah Hospital.

The unpredictability of life baffles each one of us at some point in time. And, when these baffling incidents stare at us like a life threat, things become more complex and hassled. It was life amid hardship for Palash Das, a 28 years old youth, a daily labourer from Panchtubi village, PS Pingla, West Bengal, until he was diagnosed with kidney ailment. Such was the condition that he was advised for dialysis and then kidney transplantation for his survival. This shook his small world miserably. While tears rolled down, anxiety puffed up, friends and family looked for divine intervention to save him. The financial crisis, on the other hand, was a humongous hurdle for him to handle.

Palash has had a blockage in the urinary tract since he was 10 years old. Almost 5 years back, he underwent small surgery and was advised a Kidney Transplantation in Manipal Hospital, Bangalore. But due to their finances, it was postponed with some medication. Last one year, his health deteriorated causing severe breathlessness, weakness, and difficulty in passing urine. It is when the doctors saw no other option than a kidney transplant to save his life. And his father came forward for the same and decided to donate one of his kidneys to save his son. The transplantation will now take place in JIPMER, Puducherry. Palash, along with his father will now have to stay in Puducherry, undergo dialysis over 12 months before transplantation. There are some tests which will be done aboard. After transplantation also he has to be in Puducherry and adhere to strict precautions for another 6 months for a better recovery.

According to Swami Vivekananda, man is potentially Divine, so, service to man is indeed service to God. We earnestly request you to donate for Palash Das and help him fight this crucial battle of his life. We are furnishing all the possible details about him here below. Please do have a look, and be a part of this compassionate endeavor, and show your benevolence with any little help you can. We would appreciate each and every gesture with a prayer for you and your family's well-being. Needless to say, utilizing this opportunity, we can practice consciously unselfish work. The donor has more lasting benefit than done.

BACKGROUND OF THE PATIENT:

Palash Das has a father and three brothers in his family. They are daily labourers, from which they are somehow able to manage their daily life. He was referred through one of our core members. Back in Bangalore, this situation has deeply motivated our team. Inspired by Swami Vivekananda's ideal and we decided to put our best effort to support this family till Palash gets back on his feet again. The amount collected will be transferred in parts according to the need of the situation. The approximate budget estimation is around 4.5 Lakhs INR that includes logistics, investigation, and post-operative expenses.

We have started campaigning not many days back and do not have a lot of time to collect the funds for his treatment. We request you to kindly drop the offering in the bank account given below, and also shoot an email to the specific id. Heartfelt gratitude in advance!!

"Service to man is service to God." - Swami Vivekananda